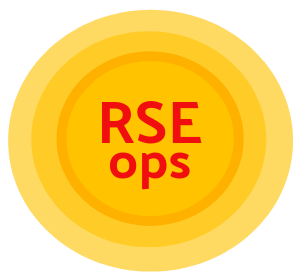 The biggest factor that originally seemed to separate RSE-ops with DevOps was HPC system complexity, and inability to change quickly. However, clouds now are also increasing in complexity, not just in services offered, but machines (and general details) relevant to each service. A second factor is availability of resources. On HPC, "on-demand" usually means waiting in a queue for your turn. This means that software development on HPC is a slow task, and typically the software is not developed alongside the system, but perhaps only used or tested there after the fact.

For working in the cloud, we operate on the basis of being able to make services and systems modular. Any piece of software can be installed when needed on a cloud resource, whereas the process is more complicated for HPC, primarily needing to be done by someone with adequate permissions, and in a way that the software can exist alongside other software and be accessed in a particular way (loaded as a module, as a container, etc.). On the cloud a piece of software can be run exactly with a container base that is needed, and there is little or no concern for dependency with other bases. The two biggest hardware dependencies that containers have, arguably host MPI and GPU, are also hugely important factors when figuring out compatibility.

There is also little concern with using updated systems or software – unlike HPC that needs to always support legacy systems, deployment on the cloud is more "use and throw away" to easily support whatever system is desired. As long as services are written in portable languages and don’t require high performance with respect to node configuration, they can be run anywhere, and people are agnostic to the details.

This allows developers to work on the bleeding edge and perhaps only be concerned with supported the latest top systems that might want to run the software (e.g., Mac, Linux, and Windows latest). Cloud DevOps also allows for scaling and deploying on demand resources with the only constraint being cost. For RSE-ops on HPC, the scaling is limited to the cluster, along with the number of people using it.

A major helper to this current landscape would be well-established tools to allow for ease of testing for an HPC user. Whether this means testing on a node allocated for testing on the cluster, or a separate build system that mimics the cluster environment, being able to trigger builds and tests alongside a code base with a CI pipeline would greatly improve the software development life-cycle on HPC. If such a system existed, and if it were easy for RSE software developers to develop, test, and deploy their own software, system administrators could better focus on improving or enhancing the systems instead of managing software for them. We could even imagine going a step further and having a more automated ability to use software for the average user. For example, if a workflow system is better integrated into the cluster, akin to how an RSE developer could push and trigger builds and tests, an HPC user could push a workflow to trigger running a test job, and upon success, if desired or needed, running it at scale. It would be amazing if we could eliminate the need to ssh in to a log in node, learn how to use a job manager, and otherwise interact with HPC. To the user, if the cluster could be exposed as a service with an easy interface to monitor jobs and job submission could be integrated with the user’s workflow, the speed of development and analysis would greatly increase.

Obviously, the greatest challenges to making the above a reality come down to security and centers being able to support more modern authentication systems. Exposing any cluster resource to be accessible via continuous integration or version control triggers requires connecting the resource to external services, which always is a risk, but there are well developed authentication frameworks for that.

Moving data from some external storage to a cluster resource to be analyzed is another challenge. A tiny step of progress is the ability to link a traditional HPC single sign on (SSO) scheme (e.g., LDAP or Kerberos) to a version control service (e.g., GitLab or GitHub) to allow for role based access, but it’s not clear how often this is done or if it’s a good direction.